Skip to content
You are here
Home > My Lab >

As I mentioned in a previous post, I thought its a good idea to have a separate post for my lab. I heard many stories about CCIEs who prepared for the lab exam using GNS3. GNS3 is a real solid tool and can help a lot. I know this for sure as I have completed my CCNP studies using GNS3 running on my old Dell Inspiron with 2GB of RAM only. And you know what? it worked really well. I especially enjoyed Routing labs except when GNS3 crashes on me at the most critical times!

I spent plenty of time debating building my own lab, renting one or just use GNS3. I dropped the idea of rack rentals, it just didn’t make sense to me. So I was left with two options. Since the actual lab exam is on live gear, I thought it would be a better idea to replicate the lab at home, it will cost a lot but it is money well spent and a long term investment. So I decided to build the lab gradually by buying a device or two every a month. I have to admit it took longer than I thought. But finally I can say that my lab is 99% ready. I am still waiting for 4x8MB flash memory modules for 2×2501, which will arrive tomorrow!

My lab is based on INE Lab. I had slightly modified the recommended gear since I already have a couple 2600s and 3550s. Also 3560 are really expensive, so I decided to have 4x3550s instead.

Here is the exact list of devices that I have:

I made sure that all devices are running the INE recommended code. While the upgrade process, I discovered, that I need bigger CF for the 1841 and bigger flash memory for one of the 2600s and both 2501. I ended up buying a new 2610xm which cost almost the same as if I were to upgrade the flash memory and ROM. I am still waiting for the flash memory for the 2501 to arrive tomorrow so I can upgrade the IOS and by that, I will have the exact lab that INE recommends, except for the 3560s which I hope it will not have a serious impact.

The only other thing that I don’t have in my lab as INE recommends, is the system RAM on routers, they recommend 256MB on the 1841s and 128 on the 2600s. Even though I haven’t done any lab yet, but I really doubt that I will have that many routes that these routers will need that memory sizes. If during my progress, I realize that this was a wrong assumption, I will update this page. But till then, I am running way less than the recommended RAM sizes.

I haven’t spent time on tidying up the cabling yet. I will work on that once I am certain that I will not need to remove any device from the rack any time soon. 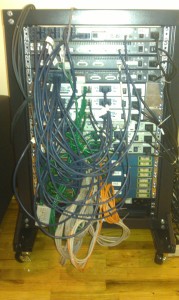